Free UK shipping on all orders over £25

You’d be hard-pushed to go through a day without coming across some type of leather – animal or synthetic, cowhide or buffalo, home-produced or imported. It’s a material steeped in history, no less useful now than it was thousands of years ago.

I pull on my shoes, grab a jacket and head to the yard. On my feet? A pair of supple, short leather jodhpur boots.

When I arrive at the yard, I brush my horse clean and tack him up ready for a ride. What does he wear? A black saddle (which is probably due a polish, but is still shiny and comfortable), with matching stirrup leathers and a dark dyed bridle. The overall picture? Simple, elegant, traditional.

We equestrians love our leather – we’ve saddled and bridled our horses in it for centuries.

Leather has a long, winding history of use through countless cultures and eras. Whilst synthetic options have popped up in more recent decades, many of us still opt for the traditional animal hide. The beautiful quality, the smooth texture, the rich smell – there’s something unbeatable about it.

The origins of leather

The first tools for leather work have been dated at 400,000 years old. Found in modern-day Hoxne, England, researchers believe that the scraping tools were likely used to prepare hides for tanning.

The earliest example of leather clothing was found in Armenia: a one-piece of leather hide fashioned into a shoe, with laces up the centre used for fastening. The shoe, called Areni-1, was preserved by the cold conditions of the cave it was discovered it, and has been dated at 5,500 years old.

Whilst early leather was used for protection from the elements for humans in the form of clothing or shelters, it also had its place in early horsemanship. Around 3100 B.C. in Ancient Egypt, chariot harnesses and couplings were made from leather – perhaps the first instances that leather was used in capacity.

The uses for leather increased as improved animal husbandry provided a steady source of hide, and leather workers became more skilled in their practise. Soon leather was used for not only shoes and clothing, but for boots, armour, and jewellery.

In Ancient China, not only were soldiers clad with leather armour for protection – horses were also protected by thick hides for battle. Made from cowhide, rhinoceros or buffalo, a great volume of material was required to kit out both horse and rider, which goes to show the importance and size of leather production at the time.

With every passing century skills refined, and creations evolved. Ancient Greece and Rome saw the invention of sandals and the introduction of tanning and dyes, providing opportunities for style and expression in colour and design.

In the 17th century, industries started to form – France created high-fashion shoes, whilst Spain focussed on armour for example.

With the industrial revolution came further, faster advancements. Machines sped up production, as the material was now used for clothing, saddlery and horse tack, coaches, books and other everyday items.

Chrome tanning was created and introduced in the Victorian age. Faster production times, water-resistant finish, and the option of a variety of colours, chrome quickly overtook vegetable tanning as the most popular method for leather production.

The 19th century saw the first production of synthetic leather. As this and other cheaper competing materials, such as rubber and plastic, were developed, the manufacturing of leather shifted to developing nations. Now, countries like India had the opportunity to become world-leaders in manufacturing and exporting leather goods.

A history of leather in India

In India, the first reference to leather was in Vedas, the Sanskrit texts that inform the Hindu religion, dated around 3000 B.C. The text referred to “mashaks” – leather water-carrying bags.

Known for beautiful, detailed artistry, India’s leather workers produced items such as mojaris and Kolhapri chappals. Through the north of the country, leather was exported via the Silk Route, which historically linked China with the West. In the south, India traded with the Romans and Greeks in Europe.

Yet it wasn’t until the British Army arrived in the nineteenth century that India found its leather industry truly beginning. With a great demand for boots and saddles, their trade expanded dramatically, setting them on the way to cementing their place in the global rankings for leather production.

Now, the Indian leather industry accounts for 13% of global production of hides and skins. Their annual production accounts to approximately 3 billion sq. ft. of leather – a seemingly impossible feat without the context that India also possess 20% of the world’s cattle and buffalo population, as well as 11% of goats and sheep.

So where does India lay in the grand scheme of things? Well globaly, they’re currently the second largest exporter of leather garments, third of saddlery and harnesses, and fourth of leather goods in general, producing both cowhide and buffalo leather.

Flexible, strong, and durable in comparison to cowhide, it stands up to the intense demands that we equestrians place on our equipment. Buffalo leather is usually processed by vegetable tanning, resulting a more natural-looking final product. Whilst this may leave it vulnerable to extreme heat exposure and the potential for staining from excess water, dutiful care ensures the leather lasts several lifetimes of use. And whilst our weather can be unpredictable, it is no match for the quality of the buffalo leather.

What’s not to love about that?

Blog written by: Mel Beale
About The Author: After graduating at the top of her class with a degree in Equine Sports Science from Nottingham Trent University, Mel took over the reins - no pun intended - of her family livery yard, alongside setting up her own freelance business in equestrian copywriting and content production.

When she's not mucking out, filling up haynets or picking out hooves, then Mel is quite possibly writing about it. Away from work, she's usually behind a camera, with her nose in a book or on the back of a horse. Nosebands and their purpose With so many nosebands on offer, it can be difficult...

Free Delivery on all UK orders £25 and over.

Always Here For You

Pay via Debit or Credit card, we also offer PayPal

Let customers speak for us

Leather & padding were a little hard which made sewing tricky. Only one finger injury so not so bad. Still looked stunning tho :-)

Amazing quality, have loved every item I have purchased ☺️

Excellent service - we had a problem ordering online, a quick phone call solved the problem. Prompt delivery when we explained we needed it for a competition. Would highly recommend.

I have personalised the browband with braided tail hair from my horse. I love it! The browband has a soft padded under side. The leather looks of good soft quality. 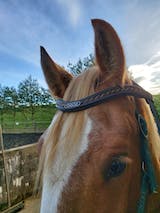